To date, 2022 has been a pretty tough year for the Great Barrier Reef. There are three significant events to consider that will play an important role in the future of the Reef.

Coral bleaching – The Great Barrier Reef Marine Park Authority has just confirmed the Reef has been hit with a sixth mass coral bleaching event on record, with recent aerial surveys showing almost no reefs across a 1,200km stretch escaping the heat. That’s 4 major bleaching events in the past 6 years. The Reef needs 10-15 years to recover from a serious bleaching event.

La Nina – We are in the midst of a La Niña weather pattern, which usually brings cooler temperatures, as well as cloud and rain, and protects the reef from bleaching. But not this year because global warming, fuelled by the burning of fossil fuels, has caught up with us. Now, even a cool year is too hot for the Reef.

The most recent IPCC report makes it very clear, that if we don’t significantly bring down carbon emissions by 2030, we will be seeing annual bleaching events by 2044.

Reef in danger – the UNESCO reactive monitoring team has recently visited the Reef to gauge its health and determine whether it should be listed in danger. Probably an unnecessary trip. The Reef is in danger. No amount of government spin can change that.

But the previous government continued to push back against an in danger listing, as it would have exposed their total lack of effective climate policy.

Given that the greatest threat to the future health of the Reef is climate change, declaring the Reef in danger is the best way to protect it. Climate change requires a collaborative, worldwide effort to combat it. The “in danger” listing will bring the focus of Australia and the world onto the Reef and together we can protect it.

We have only a decade to get our house in order by rapidly transitioning from coal and gas to clean energy like wind and solar in order to bring carbon emissions down. If we truly care about the future of the Great Barrier Reef, we must hold our government accountable and insist that Australia develops an effective climate policy.

The draft decision to list the Great Barrier Reef as “in danger” has caused much shock and consternation, even indignation here in Australia, particularly amongst our politicians.

The Murdoch media was full of words like “blindsided”, “politically influenced” and “Chinese involvement”.

The subsequent decision by UNESCO in July 2021 to delay the decision until after the next federal election is appalling.  But UNESCO delayed again in June 2022 – after the election.

Is this not a crime against humanity? 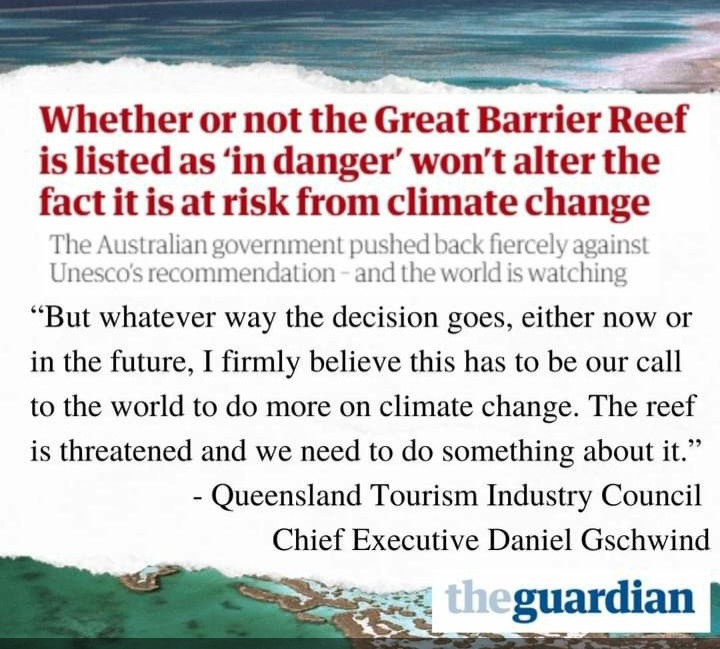 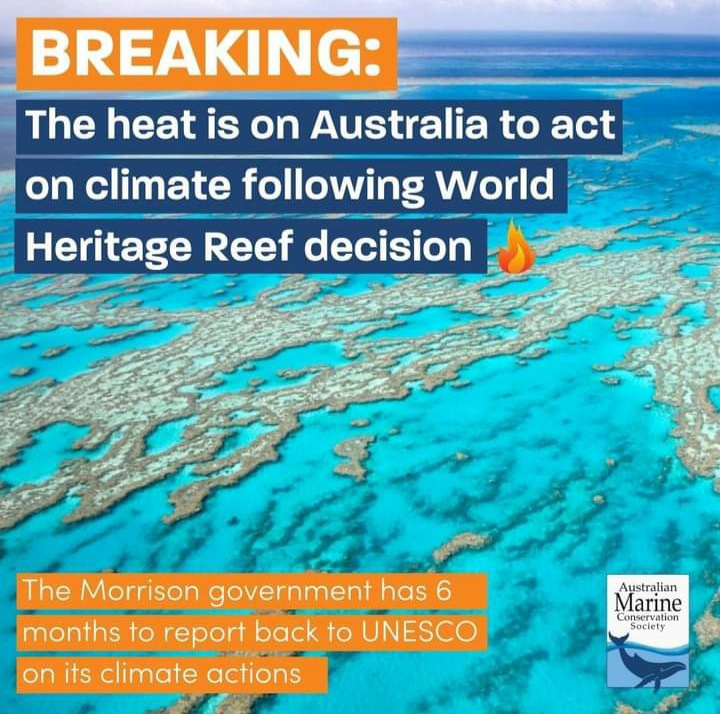 UNESCO’s World Heritage Committee was due to meet this month to determine the fate of the Great Barrier Reef’s World Heritage Listing. But the Reef has received a possible reprieve as UNESCO has postponed the meeting.

The meeting was scheduled to convene in Russia but due to the Ukraine conflict, it has been indefinitely postponed and a future time and venue has yet to be decided. This is understandable but unfortunate as the Reef’s future status, in danger or not in danger, remains in limbo.
Many scientists feel that the future health of the Reef is in danger, primarily due to the impacts of climate change. The Reef has suffered 4 mass bleaching events in the past 6 years, including this year. An in danger listing can actually help the Reef by bringing added pressure to countries across the globe to reduce their carbon emissions sooner rather than later.

The United Nations Educational, Scientific and Cultural Organisation (UNESCO) has delayed a proposal for the Great Barrier Reef to be listed as “in danger” of being removed from the list of World Heritage sites.

UNESCO cited two major threats to the World Heritage status of the reef – climate change, which has spurred three mass coral bleaching events since 2016, and water pollution from runoff out of agricultural and urban areas.

However, Federal Environment Minister Sussan Ley spearheaded a whirlwind campaign to delay a vote on the reef’s status, including a European tour, while ambassadors of more than a dozen countries were flown to the reef to see healthy corals.

WCC is disappointed that UNESCO has delayed the decision. In 2019, the Great Barrier Reef Marine Park Authority (GBRMPA) downgraded the outlook for the Reef from poor to very poor. This was based on the work of Australia’s best reef scientists and managers.

Whether the Government likes it or not, the Reef is, in fact, “in danger” and postponing that decision doesn’t change a thing. Decades of poor water quality has reduced the resilience of the Reef. We are already at 1.2 degrees C of global warming. Over the past 5 years, three mass bleaching events, powered by unprecedented underwater heat waves, has destroyed up to 50% of the Reef’s hard coral cover.”

However, there was some good news. Although UNESCO has delayed the “in danger” decision, they have asked Australia to provide an update on the reef’s health in February next year. Based on this report, UNESCO will reconsider the “in danger” listing in June or July next year. It is also quite likely that UNESCO will send out a team to assess the health of the Reef and what measures Australia is taking to protect the Reef.

The delay could prove to be a good thing for the Reef. The pressure is now on the Federal Government. They have only 6 months to develop a climate policy that will protect the Reef. Approving new coal and gas projects will be a very bad look for a Government claiming to care about the Reef.

Should be an interesting 6 months.

16-7-21  Your WCC feels that GBRMPA, Australia’s lead agency for managing the Great Barrier Reef, should acknowledge that the Reef is “in danger” and needs help.   READ LETTER

12-7-21  UNESCO, the Reef and China.  The Murdoch press tries to rescue the Federal Government with the usual propaganda, such as Andrew Bolt claiming that it is all a Chinese con.  SEE MEDIA WATCH

2-7-21  Almost 60 coral species around Lizard Island are “missing”.  A Great Barrier Reef extinction crisis could be next.  READ ARTICLE

1-7-21  UNESCO revealed its draft decision to list the Great Barrier Reef as “in danger” — a decision that appeared to shock the Australian government.  READ ARTICLE 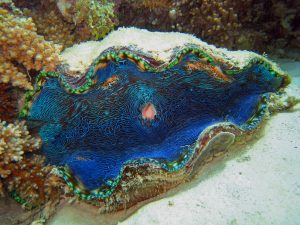 Please let us know your comments