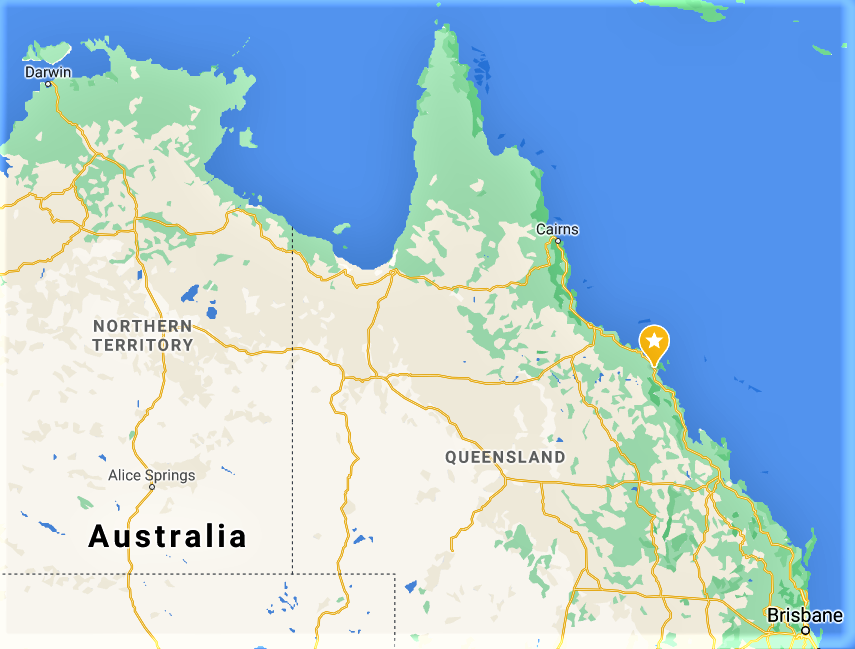 The Whitsunday coastal region is regarded as the heart of the Great Barrier Reef, right in the middle of the Reef’s 2,300km length and only a couple of hours’ boat ride away from shore.

It includes the largest offshore island chain along the entire Australian coastline with more than 90 islands with fringing reefs, an exciting haven for boaties.  We are Australia’s sailing capital and a mega destination for tourists.

We have amazing rainforests and six stunning national parks.

Our region is spectacular and unique but it also faces its biggest threats ever – rapid climate change and us!

Dugongs, or sea cows were also known as mermaids by early European sailors cruising the tropical waters in Australia and Africa.  They are shy and eat enormous quantities of seagrass to maintain their massive weight of up to 500kg, at around three metres long. 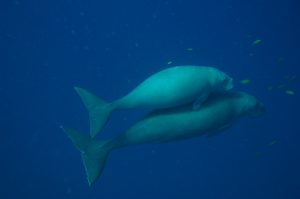 They are related to the even larger manatee which prefers the fresh or brackish tropical waters of the Americas.

Dugong populations are declining around the world but we are fortunate that the shallow waters that surround the islands of the Great Barrier Reef still provide sanctuaries, so that they can reach up to seventy years of age.

They were hunted for their blubber but are now protected in Australia.  However, they are dependent upon large meadows of seagrass, which face pollution from agricultural chemicals, urban drains, sediment from land development and coal dust from nearby ports entering the waters where they feed and breed.

Algal blooms, exacerbated by climate change, reduce sunlight and the growth of these meadows, adding to the challenge of survival. Dugongs also share their habitat with boat propellers, discarded garbage and fishing lines, as well as being pestered by jet-ski operators.

At Shute Harbour and other seabed developments and expanding anchorages, marina and channel dredging destroys large tracts of seagrass.

In the Whitsundays, volunteer groups (Seagrass Watch and OUCH) monitor the seagrass at low tide and by shallow diving.  The dugong’s future is not bright and the threatened sea grass meadows are an essential ecosystem supporting so much other life that we take for granted.

Volcano? You're swimming over one!

This ancient landscape was created millions of years ago.  The volcanic activity that accompanied the breaking up of Gondwanaland was massive. Geologists estimate that roughly 2.5 million cubic kilometres of silica-rich magma were produced along the 2,500-kilometre-long rift.

Most of the volcanic rocks were carried away to ‘Zealandia’ and are now submerged beneath the waters of the Tasman Sea. These rocks, found through deep-sea drilling, match those found on Whitehaven Beach. But marine surveys suggest 1.85 billion tonnes of sand on the beach was only deposited 12,000 years ago when glaciers covered Canada, Siberia and Northern Europe. With so much water locked up sea levels back then were much lower than they are today.

After the glaciers melted, Whitsunday Island shifted from along the mainland coast. In the process, longshore drift occurred which acted like a conveyor belt for sand. Whitehaven Beach was a perfect receptacle for that sand with its geology. Although the beach has been losing sand for the past 4,500 years, it still has enough to keep it blanketed.

How many different types of sea turtles live and visit here?

We are lucky enough to have six of the world’s seven species of turtles here in the Whitsundays. Green and hawksbill turtles are commonly seen, while flatback, loggerhead, pacific ridley (olive ridley) and leatherback turtles have also been recorded. Green, hawksbill and flatback turtles are all vulnerable to extinction, and the loggerhead is endangered.

We have unique eco systems that tolerate wind, salt spray and shifting sands. Coastal she-oaks (casuarinas) whose grey bark protects it from sand-laden winds are plentiful when you wander the beaches here. And there are many hoop pines which you can see from the water on the islands – their height and straight branches a trademark. Their bark in horizontal ‘hoops’ from where they got their name and they date back to Gondwanaland.

There are blue gums, Moreton Bay ash and Grasstrees and 13 different species of mangroves which are vital for marine life. In some of our walks you can see the transition between the land and the sea and how the mangroves can make the transition into the ocean because of their toleration for saltwater.

We also have orchids which can cling to rocks even on exposed headlands and seagrass beds which form an important part of the diet of our sea turtles as well as providing shelter for juvenile barramundi and other fish.

​Our animal life is even more diverse than islands further from the coast because the flooding that occurred in the last ice age is relatively recent so many species have been preserved. 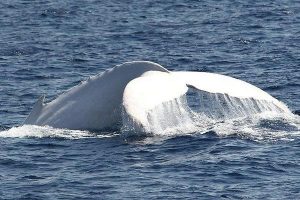 Considered to be the most famous humpback whale in the world, Migaloo may be the only pure white adult humpback whale alive today, according to the Pacific Whale Foundation.

He has been spotted on his annual migration through the warm waters of the Great Barrier Reef between June and October.  Reason enough to go whale watching in the Whitsundays.

Can you solve the Mystery of Whitehaven Beach?

Whitehaven Beach on Whitsunday Island is stunning and unique.  One of the most popular unspoilt beaches in the world.

However, there is a mystery.

Its dazzling, bright white sands, consist of 98% pure silica. Local rocks do not contain silica, so where did it come from?  It has been suggested that the sands were brought to the beach by prevailing sea currents over millions of years but the mystery continues.

Amazingly, the sand on Whitehaven Beach does not retain heat making it comfortable to bare feet on a hot day. This sand is also very fine, and can damage electronic equipment such as telephones and cameras.

Some of our visitors arrive by air but not in a plane. 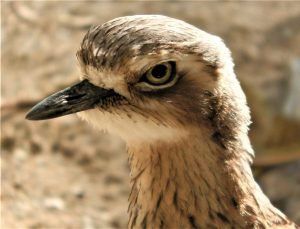 Thousands of migratory waders visit us each year as the Whitsundays are an important stopover for species such as ruddy turnstones, whimbrels, lesser sand plovers and bar-tailed godwits, which feed and roost on the reef flat and island beaches. Watch out for the bush stone curlew and its haunting cry and the beautiful rainbow bee-eaters.

With an estimated 175 bird species enjoying our region, it’s an ornithologists’ paradise.

Who was here before the Pyramids were built?

The Whitsundays and the neighbouring coastal fringe are the traditional home of the Ngaro Aboriginal people who adapted well to climate change after sea levels rose in the last Ice Age. Adapting to an island and seafaring lifestyle, the Ngaro people are also known as the ‘Canoe People’. Archaelogical research shows that the Ngaro inhabited the Whitsundays with artefacts dating back to the past 9,000 years. Evidence of Ngaro occupation includes stone axes and cutting tools found in a stone quarry on South Molle Island, numerous fish traps (stone structures made for catching fish) throughout the Whitsundays, and rock art discovered at Nara Inlet on Hook Island. You can visit the rock art at the Ngaro Cultural Site (170m walk which is steep for about 50m). There is also the Whitsunday Ngaro Sea Trail which follows the island visiting iconic and culturally significant features. You can touch an etched footprint on the walk up to the cave and follow in the footprints of the ancestors of today’s Ngaro people whose welcome is Wooda Moolie

At Nara Inlet, middens (large piles of discarded shells and bones) have enabled archaeologists to determine that people began using the cave there about 2,500 years ago. Hundreds of other sites—many much older—have been found across the islands.

The writings of early explorers describe some of the Ngaro people’s skills in using and living in the marine environment. In 1770, Lieutenant (later Captain) James Cook recorded a Ngaro expedition in an outrigger, while others describe sturdy three-piece bark canoes capable of journeys on the open sea. These canoes, much more common than outriggers, were constructed from three diamond shapes of bark, one for the bottom and two for the sides. A fibrous root was used to sew the three pieces together.

Ngaro people were also adept at using island plants. Grasstrees provided food and tool materials, yielding starch, nectar, shoots and grubs, and the ingredients for glue, firesticks and spear handles. The Ngaro also used many other plant species, including the coastal she-oak (bark and twigs for medicinal purposes, hard wood for spears and woomera pegs), and the native hibiscus (some parts apparently eaten, while bark was soaked and separated, then woven into dilly bags, fishing lines, nets and ropes). Ngaro women collected vegetables, seeds and fruits, and prepared them for cooking and eating.

A great variety of tools, utensils and weapons were used for fishing, hunting, gathering plants and cooking. The most effective and simple tools were broken pieces of rock used for cutting, crushing grains and as axe heads. Other tools included animal teeth and twists of bark. Woven grass nets were used to gather shellfish and fish, while fishing hooks were made from wood, bone, turtle shell and shells. Detachable harpoons, with points made from wood and bone, were used to hunt dugong.

Fire was used for warmth and cooking, and to maintain grasslands and open up areas for hunting in forests.

Our endangered species include the Proserpine rock-wallaby introduced to Hayman Island as part of a species recovery program. If you visit Conway or Dryander National Park, you may see some. We also have a large number of flying foxes and Lace monitors – dark with white, cream or yellow scales up to 2m long. You can sometimes see them trying to cross the road as they eat carrion (rotten carcasses). You can also see them in numbers on the south end of Whitehaven Beach.

​We have the largest nursery for Humpback whales in the eastern seaboard. They arrive here from their feeding grounds in Antarctica annually from June to September to have their young. It’s an incredible moment to bear witness to a mother teaching her calf to swim in the winter months (June-September) as they frolic around. The good news is these mammals have returned in numbers to almost the same as in pre-whaling days. Boats are not permitted within 300m of any whales.

What is a Brachychiton Compactus? 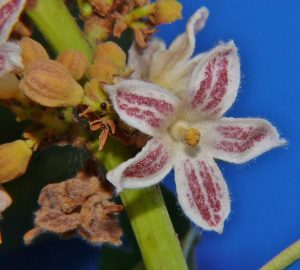 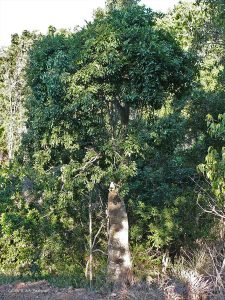 Yes, it’s a bit of a mouthful but it is our local tree – unique to us.  It is a type of bottle tree and it can grow to 15 metres.

See if you can find one when you go walking.  Here are some facts to help you in your search.

So, it’s not surprising with all of these natural assets, we have a vibrant community who focus on the environment. The Whitsunday region is home to around 35,000 permanent residents who include many strong fighters for conservation.

Whitsunday Residents Against Dumping (WRAD) was a volunteer community group that came together officially in early 2014 to protect the Great Barrier Reef and the Caley Valley Wetlands from the proposed Abbot Point coal port expansion. This expansion meant that an enormous amount of toxic dredge spoil was to be dumped in the ocean – within the boundaries of the Great Barrier Reef Marine Park.

And we are home to Eco Barge Clean Seas Inc a volunteer organisation which removes marine rubbish – since July 2009 they have moved 207,720 kilograms of marine debris – and they recycle and transform ocean plastics to reduce landfill and care for injured and sick turtles.

We have Whitsunday Community Garden established in 2016 which swaps and shares produce and Fauna Rescue Whitsundays which provides a 24 hour wildlife hotline service.

As well, we have Whitsunday Catchment LandCare which encourages sustainability and provides a local wildlife and local plants database.

The Whitsunday Conservation Council provides the opportunity to help these wonderful initiatives and to place conservation at the centre of all government decisions, whether it be local, state or federal which involve our beautiful backyard.

A healthy environment is essential, if we are to maintain the usual and the unusual flora and fauna that is our heritage.