Helium balloons are so pretty and make special occasions more memorable – for us that is – but not for other creatures or the environment.  Released balloons always come back to Earth as litter. 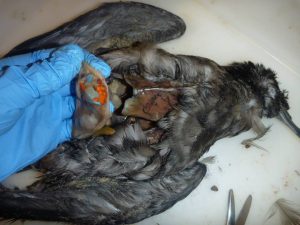 When mistaken as food, balloons can slowly kill wildlife through digestive blockage, strangulation and choking.  Affected wildlife includes marine animals such as shearwaters and turtles, as well as freshwater animals such as platypus. Farm animals can also be affected.

See the impacts on Wildlife and the Environment HERE

Balloons are no longer made from natural latex but a synthetic. While the industry claims balloons biodegrade, this can take many months or years, all the while posing a threat to wildlife. Non-biodegradable attached streamers and disks add to the litter and threat. Mylar balloons do not biodegrade; they can cause power outages and spark fires.

Cleanup crews here in the Whitsundays and throughout the world are well aware of the increasing prevalence of balloons, either whole, burst or remnant, many with attached streamers and disks.

Helium is a scarce, non-renewable gas, vital to important scientific, medical and industrial uses and should not be wasted on activities such as releasing balloons for commemorative or celebratory reasons, or for promotional reasons.

Helium balloons can travel long distances, across council and state borders, creating litter hundreds of kilometres from the release site, hence a unified approach across the nation is required.

Banning the release of balloons will aid Waste Reduction Targets

Agencies already spend a great deal of time and effort attempting to educate people about the environmental impacts of released balloons. Despite this and a variety of anti-litter and anti-balloon release laws across Australia, releases still occur.

The use of helium enables the accidental release of balloons. With easy access to helium and helium balloons now ubiquitous at events and festivals, this is all too common.  Just one released balloon will result in litter and pose a threat to wildlife.

There is a global movement against the release of balloons due to their environmental impact (read more at BalloonsBlow.org).  Australia could lead the way and be the first to nationally ban helium balloons.

A solution would be for the Federal Government to unite the States and Territories of Australia for a national ban on the release of balloons and the use of helium to inflate balloons for non-scientific uses.

A start has been made as sky lanterns are already banned nationally.  BOM are working on changing their weather balloons to make them less of a problem, as they release over 50 a week that end up in the ocean. Some states have already passed legislation imposing bans on balloons but in the end it is up us to make a start and stop buying helium filled balloons.