Infra-red cameras are located around the flight aviary and caught the moment the first flying fox flew to freedom.  Watch for the two eyes reflected in the light and in a flash, wings open and it’s off!

Last week you may not have realised a secret event was unfolding just after dusk here in the Whitsundays. The nightly flyout of a local wild flying fox colony was underway but this night was going to be different.  They were going to meet up with some hand-raised orphan flying foxes – the largest fruit bat – for the first time. 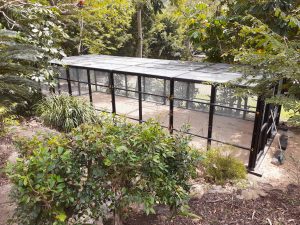 For Suzette Pelt, Fauna Rescue Whitsunday’s bat co-ordinator, it was her first release from a new, purpose-built flight and heat-stress aviary, constructed thanks to a Government grant in 2020.  Bats are a keystone species whose populations are crashing from climate change heat events and the aviary can house around 25 flying foxes under normal conditions and double that in a heat stress emergency.  Flying foxes will die when temperatures reach 42C and the Whitsundays recorded its hottest day on record of 44.9C day on 26 November 2018, smashing the previous record of 42.9C. (Dec 1995)

For the first few months of their lives, the orphaned baby flying foxes are raised by specially trained carers – there are about 15 from Mackay to Bowen – until they are 12-13 weeks of age. Then they are transferred to what’s known as a ‘creche’ aviary to learn about being a bat with others the same age. The final stage is a short time building strength in the flight and release aviary before release around 16 weeks old. 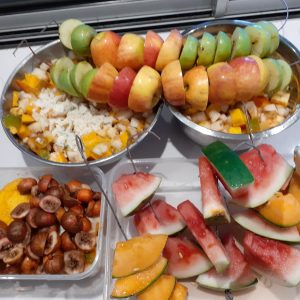 “Then they are separated from human contact and start socialising as a colony in their own right, learning to fight over food, play boxing and doing what bats do,” explains Suzette.  “When they are physically and mentally ready and conditions are right, the door is opened after dark while we wait for the wild flyout to happen overhead.  Some might go that night, others will take several days to find the courage to launch themselves out into the big wide world. For the next 2-10 weeks, strands of fruit are hung in the trees to provide support feeding around the aviary as these bats may come and go, venturing further and further away until they’re ready to join the wild mob.” 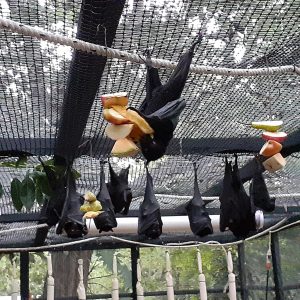 Flying foxes are highly mobile and these orphans have come from Rockhampton, Mackay, Whitsundays and Townsville.  Released orphans have been tracked hundreds of kms from their release point and Fauna Rescue is looking into future microchipping of animals released from their care.

Suzette said that barbed wire fences are one of the main reasons we get injured bats, the baby is found on the dead mother or on the ground crying and starving. Flying foxes navigate by sight, so on a dark night, fruit trees surrounded by nearby barbed wire will nearly always catch an unsuspecting bat as it swoops down and out of the tree.  “Countless bats die undetected this way, dying a slow and painful death,” she says.

“And never touch or try to cut a bat off a fence.  Cutting the wing membrane which is full of nerves and tiny veins is like cutting the skin between your fingers, only more painful.  Drape a dampened lightweight fabric like a tea towel gently over the animal to slow dehydration and protect from sun.  And call the Fauna Rescue hotline so a vaccinated rescuer can give advice and get there as soon as possible. If rescued in time, you save an important animal from a painful death and often the injuries can be treated and the animal fly free when its recovered.”

She said many barbed wire fences were unnecessary. But suggests that people with barbed wire around their fruit trees tie short strands of old electric fencing tape  (or other highly visible tape) every few metres on the fence, it really does make a difference when the bats can see the wire this way. 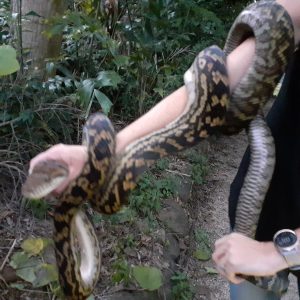 The only downside is that the aviary, which was built last winter by volunteers, is also a magnet for pythons, bats being one of their favourite foods!

“I’ve lost count of how many middle of the night calls to the snake catchers we have done” Suzette says.  “The largest was 15kg and around 4.5m long.  It had made itself at home on the roof, waiting opportunistically for a bat, not realising the aviary is completely snake proof and it would never get one!”

The Whitsunday release site is about 2km (as the bat flies) from the Cannonvale colony and under their nightly flightpath.

Why should we care about Flying Foxes?  Well, without them we’d have no forests for a start.  They are the seed spreaders and pollinators of the forests.  Bats don’t swallow the pulp of the native fruits they eat, instead, in an evolutionary process that keeps the only flying mammals lightweight, they extract the juices and spit out the pulp and skins, encasing the seeds in a perfect packet called ‘spat’, ready to sprout. And in this way are a vital keystone species, keeping our rainforests and native forests healthy.   And at night, when most Australian native trees need to be pollinated, they are the only species out pollinating.  In fact, they prefer the nectar and pollens of eucalypts, melaleucas and banksias.  Populations of bats are crashing from habitat loss, injuries from human activities (barbed wire fences, fruit netting), Council inhumane dispersal practises and climate change heat events.  Every bat counts.