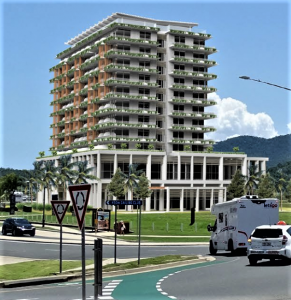 THE FIRST OF MANY 12 STOREY MONSTERS

Airlie Beach is threatened by high rise development at the Port of Airlie, just behind the famous beach.

Tourists and residents come here to get away from toxic traffic and concrete jungles.  They want fresh air and tropical ambiance.

Artist’s impression of the first of many buildings based on material submitted.

BUT THERE’S MORE … Airlie Beach does not need these high rise hotels.  The demand isn’t there because we don’t have the miles of beaches that attract the hordes.  Even if the demand was there, Airlie Beach does not have the carrying capacity in its public recreational areas to provide adequate space for the thousands of tourists touted to fill these chicken coups.

AND IT GETS WORSE … Our council has been asked by the developers to donate public land to their project!  This is not the first time that developers have tried to take public land from our community.   If allowed by our council, it will set a precedent that will destroy the Airlie Beach that the world knows and loves as a relaxed low-key tropical paradise.

WHITSUNDAY COMMUNITY SAYS NO TO HIGH RISE ON THEIR FORESHORE 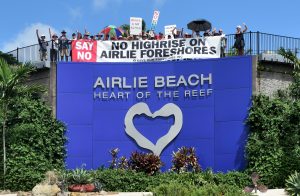 The controversial 47mtr building approval given by the Whitsunday Regional Council 24 Nov21 to Meridien AB Pty Ltd (Port of Airlie) has seen the community rally together as never before.

Despite 2242 submissions made against the proposal, none in favour,  5 councillors, none from Airlie Beach, approved the 12 storey (47mtr) tower in a 3-5 storey zone, massively outvoting the single Airlie Beach councillor objecting to the proposal.

The second councillor from the Airlie Beach/Cannonvale region was not able to vote as Council declared he had a conflict of interest after a family member submitted an objection to the development.  Both councillors opposed to the high rise have decades of experience in the tourism industry, whereas none of the other 5 councillors have any.

As soon as legally advised, and having no other options, WCC member and long running community group Save Our Foreshore Inc (SOF) launched the community action against the Council in the Planning and Environment (P&E) Court.  SOF has successfully defended Airlie Beach and the wider region against 2 previous Airlie Beach public foreshore landgrabs and stopped a dangerous and polluting open cut shale oil mine on the Whitsunday coast and Goorganga Wetlands.

BACKGROUND: This 47mtr development is part of the Port of Airlie project; a State Significant development from the 1980’s-2000’s that since 2011 has been in receivership.

During the long approval process for this project, which would see the loss of an environmentally significant marine habitat replaced with a dredged marina and filled in bay for a commercial and housing suburb on the seabed, the community was widely consulted.

Acknowledging there would be negative impacts on visual amenity – in other words the views from properties on the slopes and surrounds of the bay – the Queensland Government finally approved the development with a maximum of 3-5 storeys in that foreshore area.  Not 12 storeys that Whitsunday Council has approved and now subject to an appeal process from SOF in the P&E Court.

This developer, in receivership, also laid claim to a parcel of public parkland to create a wide access road to this high-rise tower, instead of the pedestrian walkway originally approved by the Qld Co-ordinator General. This may become a public road to nowhere, with maintenance funded by ratepayers, only providing access to the high-rise and any other subsequent developments on this Port of Airlie site.

Something is Very Wrong!

How can a Council’s planning department support a development that attracted 2242 objections; is so far outside the town plan’s guidelines, and at odds with Airlie Beach’s renowned low-rise, village atmosphere tourism image?   And all with apparently with no tourist industry consultation.

The region’s planning documents do recommend that a ‘premium’ hotel in Airlie Beach is needed for the future. But as widely known and appreciated by the tourist industry and anyone else, except it seems the majority of Whitsunday councillors, current expectations for premium hotels, especially in a world-renowned picturesque location like Airlie Beach, are hardly compatible with, nor dependent on such a “premium” hotel being built as a high-rise tower block!

People can’t miss the large highway and Shute Harbour signs showing what we were promised and what Council has approved.

There are also banners on buildings around Airlie Beach.

These billboard signs and banners are made possible by the massive community and business support SOF has received.

The appeal to the Planning and Environment Court vs Whitsunday Regional Council will be an expensive process but like our billboards SOF is confident of continuing community and business support.

Taking on Council, developers and the Queensland State Government is nothing new to SOF, but we do need your support.

HOW YOU CAN HELP

DONATE HERE via the GO FUND ME – STOP AIRLIE BEACH HIGHRISE – organised by SOF President Suzette Pelt.  Funds raised will help meet legal costs of the SOF appeal to the Planning and Environment Court and other campaign expenses.  Or direct deposits can be made to National Australia Bank BSB 084501  Account 575807657  Name Save Our Foreshore Inc.  All SOF Inc. committee members are unpaid volunteers.

Thanks to everyone who has contributed to date.  Updates can be found on the FaceBook page and Members & Supporters newsletters.   Please contact SOF on saveourforeshore@whitsunday.net.au if you would like to join or support in any way.

SOF BACKGROUND and why we should be proud of their work

SOF became a founding community member of the Whitsunday Conservation Council in 2020, but SOF itself was formed in 2003 and successfully stopped the first private commercial high-rise proposal on the lagoon carpark public land, which is a reserve zoned for park and recreation. 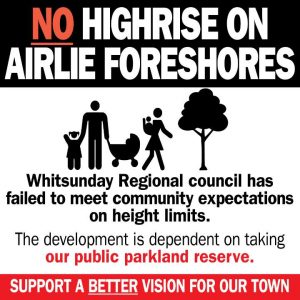 It took 3.5yrs of SOF led community protest, and a review by a State Government appointed independent assessor for that first high-rise proposal to finally be rejected by an embarrassed Beattie government on the basis that it did not meet uses under the Land Act.

Since then, the public land grabs have continued in one form or another and SOF along with the community has stood up to stop them time and time again.

The community should not have to repeatedly remind our mayor and councillors to listen to the community.  It questions their honesty with the community and their much touted transparency.  It says a lot about the level of leadership and diligence of the Whitsunday Regional Council.

PORT OF AIRLIE BUILDING HEIGHTS as approved by Queensland Government State Development/CoOrdinator General in Dec 2003  READ reference: 4.23.3 Page 47.  Why can the Government walk away from any responsibility when the same reasons that governed this decision making apply equally today?