Firstly a data chart above that looks like we might expect a La Niña year to look, the six months of Dry season, June-November.

Which is largely why the grass is green and cane harvesting has run late.  However, in a proper La Niña, December totals should be leaping into dark green and blue on this chart, December MTD: 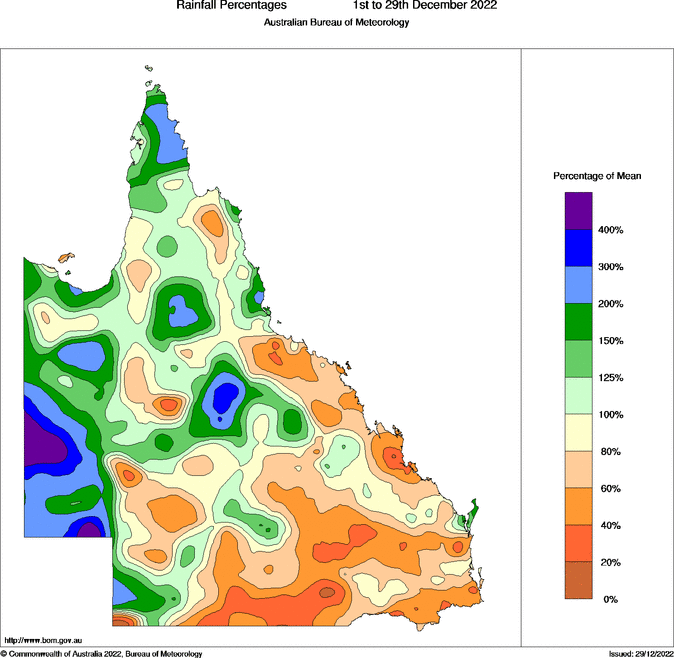 But apart from looking like some 1960’s dye-projection pop-art, it doesn’t paint a pretty picture, for most of the state in fact.  The western border areas, a blob in the middle, a splosh around K’gari, and the usual strip contending for Golden Gumboot award, but half the state is in sub-mean territory.

So how did the La Niña calendar year end? (Spoiler – much the same as the last 24 months): 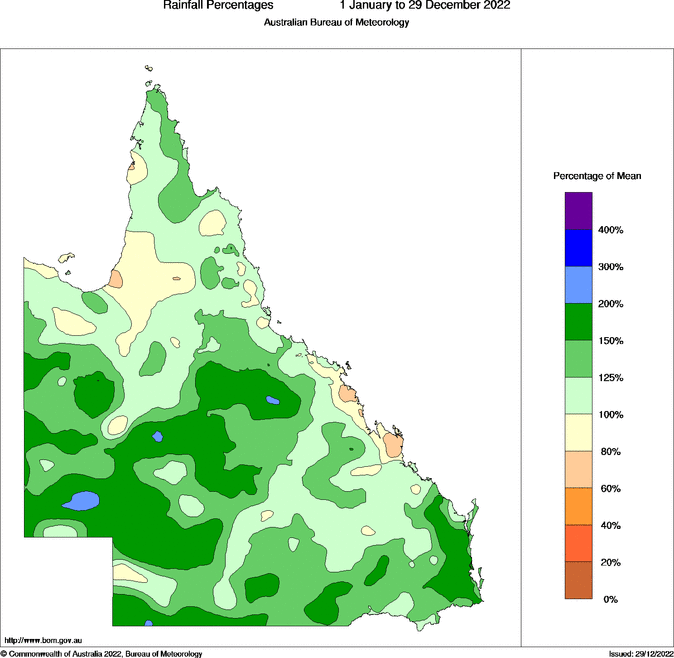 Impressively green. But compare the Wet Tropics result to what might be expected in a La Niña year, and this is under-whelming (Cassowary-Hinchinbrook) to massively under-achieving (Mackay-Rockhampton). Only out-of-Wet-season rain brings us up to normal-like in the end, far short of expectations.

Sliced and diced any-which-way, there’s no hiding the significant shortfall in our region. This is 24 months to June 2022:

All in a La Niña declared period.

I’ve looked at charts back 121 years and can’t see any year that looks like what we now see.

The BOM Outlook for Jan-Mar rain is back to median, which suggests this dam storage trend-line won’t change much (unless we get a cyclone):

Still at 52%. All the nation’s capitals have storage above 80% except Perth on 56%. When we’re bracketed with Perth, things are serious.

As Alan Kohler wrote in a March article, “The optimists have failed us. Pessimists, please report for duty”, we are led at all levels by optimists. But because they’re optimists they don’t prepare for another pandemic, preferring the Trump Covid-19 approach, “It’ll all just go away, like magic, you’ll see”. Kohler noted that this why ‘the world has been so shocked by Vladimir Putin’s invasion of Ukraine’.

It is also why ‘nothing has ever been done about climate change, either to prevent it or protect us from its effects, even though scientists have been seriously warning about it since 1990, because politicians and CEOs are inherently inclined to think it’s going to be OK’.

To go full-pessimist is to flirt with melancholia, but the key to sustainability is to be realistic.

We might hope that longer term patterns of rainfall might return, but act according to what is experienced. The prediction made (decades ago) that with climate change climatic zones would shift, that we might get a bit more of what was Townsville-like, does seem a plausible explanation of what we are (not) getting.

At least we don’t have blizzards.