A recent visit to the Climate Change Hub at the Whitsunday Regional Council revealed a fascinating fact. Council is considering what colour and type of product to paint their roads after recent research found that by 2050 the number of days above 40 degrees in the municipal town of Proserpine will have increased by 540 per cent.

As ratepayers, we are being forced to face the inevitability of a future where heat, caused by climate change, will be our worst enemy. Yet, we still have no national energy policy. Worse, we have a bevy of influential leaders at the state and federal government level who continue to court the fossil fuel industry.

While our councils are spending ratepayers’ money on the inevitability of climate change, our Federal and Queensland state governments are hovering on the precipice of approving yet another coalmine. Clive Palmer’s proposed Central Queensland Coal (CQC) project would be built just 10kms from the Reef World Heritage Area between Rockhampton and Mackay. In less than a week the Queensland Premier will make that decision. 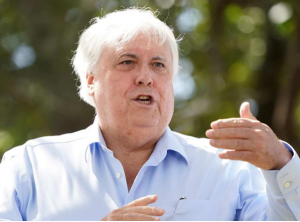 Clive Palmer’s catastrophic legacy of environmental fallout would surely sound alarm bells to any political leader considering granting a lease for this new proposed mine. Palmer’s company, Queensland Nickel, north of Townsville, produced about 30,000 tonnes of nickel and 1500 tonnes of cobalt a year. BHP Billiton, who sold the refinery to Palmer in 2009 warned the ‘groundwater is already high in ammonia’ and ‘post closure activities could go well beyond 2021.’ It was closed at a time when Australia had no legislation to prosecute directors for the environment fallout. There was little coverage on the cost of the cleanup or who paid for it.

Water quality has one of the worst impacts on reef health. We have seen too many marine creatures washed up because of toxic discharge. When I was living on Magnetic Island – 8 kms off Townsville, there was a sharp surge of dead turtles being washed up on the island’s beaches. Between 1 January to 30 June 2012 there were 168 compared with 14 in 2016 and 12 in 2017 for the same time period. In June and July 2012, there was a further unprecedented event: 102 mostly adult female green turtles were washed up on Upstart Bay, south of Townsville. Some of the material in the samples from the liver, kidney, muscle, lung and shell from the dead turtles were at a concentration the that the ‘machines couldn’t handle’ according to then GBRMPA Manager of Species Conservation, Dr Mark Read who also revealed this had occurred ‘because a particular metal was at high concentration.’

Global warming causes bleaching and high ocean temperatures. As a tourism operator, I have seen bleached coral in the fringing reefs of the Whitsundays as recently as a few weeks ago. Thankfully,  we were spared much of the major bleaching events of recent times because of cloud cover caused by a cyclone off Fiji. But we cannot escape the fact that half of the coral cover on the Great Barrier Reef has died according to the Great Barrier Reef Marine Park Authority (GBRMPA) after major bleaching events and that the temperatures are rising. Not to mention we are also reeling from the effects of COVID on our tourism industry.

We are even now admitting, through the recent Climate Council report that the 1.5C target we joyously embraced from the Paris Treaty is now unachievable unless we employ drastic action. The Queensland government will be deciding this Wednesday whether Palmer’s proposed mine goes ahead. As author of Following its Dirty Footsteps: Adani, I pinpointed that permitting the Adani Carmichael mine would open the floodgates for other mega mines. Clive Palmer’s proposed mine in the Galilee Basin was one of these

Adani, now named Bravus Mining, has already received several fines after a so-called rigorous environmental process at the Federal and State government level approved the company to mine yet more fossil fuels, the major contributor to climate change. Our environmental regulations, both at the State and Federal level, are supposed to stop environmental harm. Meanwhile, we focus on how much money it will cost to change the colour of our roads with a sickening acceptance that spells the way of the future. Surely Annastacia Palaszczuk, you have learned the mistakes after approving the Adani mine and can recognise that approving Clive Palmer’s mine will earn you a place in history not for creating jobs but for making a major contribution to aiding and abetting the disappearance of our Great Barrier Reef?

The best way to avoid environmental harm to our iconic Reef – and support Reef tourism long term – is to stop approving new fossil fuel projects like the CQC open cut coal mine.