Sea turtles have successfully cruised the world’s oceans for 65 million years, since the time of the dinosaurs. That’s why it’s hard to believe these animals could become endangered after all that time.

As I prepare for another day of diving on the Great Barrier Reef – a job I have cherished for the past 40 years – I am looking forward to a visit of a sea turtle or two. However, I can’t help but wonder if future generations of divers and snorkelers will have the same opportunity to encounter these enchanting animals.

Climate change is impacting marine life on the Great Barrier Reef in ways many don’t understand, or refuse to acknowledge. It’s only when you’re metres under water, immersed in a world only a few are privileged enough to visit every day, that you see and feel the sense of urgency at hand as the coral turns white and sea animals become rarer.

The effects of global warming are far-reaching, more than most of us realise. Many serious impacts fly under the radar, or in this case, under the sonar. 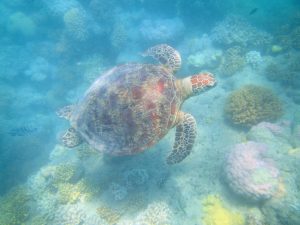 For many, the turtle is as iconic to the Great Barrier Reef as koalas are to national forests. We saw bushfires fuelled by climate change wipe out entire koala habitats, killing thousands of animals and attracting the attention of world-wide media.

The difference in the turtles found on the Great Barrier Reef is only that they are under the sea, not as easily accessible and perhaps less iconic to Australians – but without a doubt, just as important.

Talk to anybody who has spent a bit of time diving or snorkelling the coral reef and you will hear a turtle story. Watch people encounter a turtle for the first time and you hear shouts of delight. It seems that the sea turtle is everyone’s favourite marine animal, and a real icon of the Great Barrier Reef.

So, what happens when climate change impacts its home, its breeding grounds and its food sources? Will the world media come to the aid of the sea turtle like the koala?

From the day a sea turtle is hatched, its life is a struggle for survival. For every 1000 sea turtle eggs laid, only about one turtle reaches adulthood due to natural predators and other obstacles. Those that do make it face numerous threats from humans; habitat loss, hunting, marine debris and pollution.

Today, most species of sea turtles are listed as endangered or critically endangered by the World Conservation Union. And now, climate change is exposing sea turtles to even greater threats.

Sea turtles are unusual as they use both marine and terrestrial habitats during their life cycles. They nest on land but spend their lives in the oceans. Unfortunately, this exposes them to multiple impacts of climate change.

The beach sites of a sea turtles’ birth, where they return as adults to lay their eggs, are under threat from rising sea level and erosion of nesting sites.

An increase in nesting beach temperatures is impacting the sex of turtles, as they rely on the temperature of the sand in which the eggs incubate to determine the gender of the hatchling in a nest.

The future of the sea turtle is in doubt because of human activities on the land, the sea and now the atmosphere. It is sadly ironic that the sea turtle’s continued existence is now entirely dependent on human intervention. Reducing carbon emissions to reign in global warming is the obvious and most important step that we must take. Now.