When a tree was felled on a private property near Moranbah, some 200km west of Mackay in December 2020, a colony of microbats, including babies – known as pups – was found inside. The property owner was devastated at the death of many on the spot from impact injuries, shock and heat. They gathered up the survivors inside the logs and delivered them to Fauna Rescue Whitsunday volunteers Ella Harker and her Mum Jodie Harker in Moranbah.

As a volunteer assistant to the local vet and with helpers, Ella was able to administer emergency hydration, medication and cooling to some 50 bats.  Without specialist care, microbats won’t survive long, especially with injuries and babies.  And microbat mothers often have twins.

Microbats weigh only around 10-15 grams and are like little ‘insect terminators’. They’re important because they eat vast numbers of insects, contributing to the control of insect populations in the environment. This is important to modern society because they help control many crop pests, such as fruit fly, as well as human diseases, like dengue, Ross River virus and malaria.

So what to do? Injured microbats need 24-hour care. In Fauna Rescue Whitsunday’s range, covering from the Bowen Basin, to south of Sarina and almost to Townsville, there are simply not enough trained microbat carers and no specialist flight facilities. What seemed like the impossible became a reality. In less than 24 hours, an emergency convoy was set up to drive the bats more than 1000km to Brisbane. 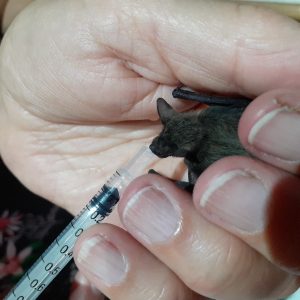 Arriving in Mackay from Moranbah for a sunrise start, the bats were fed and hydrated and secured for their next long leg to Maryborough. This would be a high-risk run, as normally they would be fed and checked every few hours but time was of the essence and getting them to their destination with as little disruption was critical now.

All went well.  Michelle from Australian Microbats met the convoy in Maryborough, safely transporting them to her facilities in Brisbane, the only place able to handle these numbers from central NSW to Queensland.

Once in care with her, injuries were assessed and there were sadly more casualties.  Some from identified injuries, some unknown.  Some of the babies were just too small to survive after their mothers died.

The survivors are doing well and when fully recovered, which will take many months, they will be returned to their home area.

** NOTE:  All bat handlers shown are vaccinated against Australian Bat Lyssavirus.  If you see a bat in trouble or injured, do not touch. Call your local wildlife rescue group or RSPCA who will locate the nearest vaccinated rescuer.

DID YOU KNOW: Microbats can eat up to 1500 mosquitoes a night!  You’ll see them just after dark, looking like fast small birds, chasing after mosquitoes (and other biting insects) which might be attracted to lights around verandas. You want them around!  But one of the main causes of their deaths is being hit by ceiling fans, a very painful way to die, as their fragile wings are easily broken.