Drupella snail anyone? No I am not talking about a culinary delight but a persistent little pink critter, a tiny pink snail lurking on our reef, about 5cms long, which eats live coral tissue. The white telltale scars it leaves behind then become covered in algae spelling the death of the coral. And they are lurking in the fringing reefs of our own Whitsundays.

This week I was fortunate enough to learn how to spot them and taught how to pluck them off to give the coral a fighting chance. As if things aren’t bad enough for our reef with Climate Change; declining water quality, Crown of Thorns and this little snail.

Last Monday, the Great Barrier Reef Marine Park Authority took a bunch of tourism operators out to a couple of our bays to train them into becoming citizen scientists with the aim of the operators being involved in collecting and monitoring all sorts of data about the state of our reef.

I am glad to say, after snorkelling in Saba Bay on Hook Island, we discovered that in this bay, at least, the soft coral is growing back, albeit slowly, after the crushing effects of Cyclone Debbie in March 2018. Thanks to another cyclone off Fiji – Cyclone Winston – the Whitsundays escaped some of the devastating heat that caused the widespread bleaching further north on the Great Barrier Reef in 2016 because of the continuing cloud cover. Cyclone Debbie, as most of us know, had a devasting impact on our fringing reefs in the Whitsundays.

This summer, we’ve been blessed with lots of clouds and rain, but it is a mixed blessing bringing its own issues in the form of increased sediment and nutrient run offs and changes to water quality. Changes in water temperature and salinity is one of the causes behind Drupella outbreaks as the snails are attracted to corals that are stressed and in low salinity waters as is overfishing. 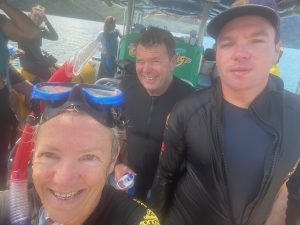 As a tourism operator, we will be seriously monitoring a couple of bays at some of our regular spots so we can set up a weekly monitoring program to record exactly what is happening down below. And this will involve volunteers.

The Great Barrier Reef Marine Park Authority has the intimidating job of being custodians of the reef which is 2,300 kms long and the only living organism to be seen from outer space. The Authority needs as many people to help care for it as it can find. Its Eye on the Reef program encourages anyone and everyone to post photographs of what they have witnessed out on the water including illegal fishing. (Campaign Details)

All this citizen science helps the scientists and researchers come to grips with what’s happening on our reefs and contributes to GBRMPA’s data.

Online courses provided by GBRMPA as training for Tourism Weeklies provide fascinating ‘cool facts’ like the first known record of Trichodesmium,  that brown stuff that looks like an oil slick and is otherwise known as sea sawdust, was in Captain Cook’s logbook. No less than Charles Darwin wrote about it in 1832 from the Beagle.

The aim of Tourism Weeklies, apart from the important role as an indicator of reef health, is to help inspire the guests and the crew to make their jobs much more interesting.

Since the dire news from GBRMPA that there has been an estimate of 50 per cent of coral cover decline since the early 1980s, there has been a considerable effort and resources put into helping the reef. Reef Catchments, for example, advocates for the reef but also looks after best land management practice for farmers in the Mackay Whitsunday and Isaac region. Water quality is a vital issue in the decline of our reef and although directly linked to Climate Change, the biggest killer, it is something we can more immediately address. 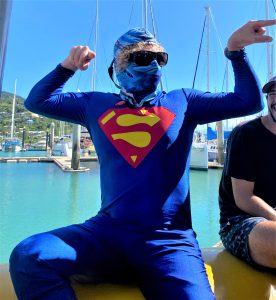 ‘Fluffy’ our tour guide for the day and the face behind the Eye on the Reef program is an exuberant, Superman-outfitted Chris Jones. I told him he had missed his vocation as a stand-up comedian. His knowledge and delivery meant our education was fast-paced, inspiring and easy to comprehend. As he made his Superman dive down to the bottom, arm outstretched, he pointed out a boulder coral grazed by bleaching. It looked like the kind of burning we might experience when we go outside without a hat. Its top was scorched. He became more than excited after diagnosing one coral with one ailment until he saw the distinctive brown-band syndrome that was slowly killing it. A coral, he announced soberly that could have been around 50 years old.

Steve Fisher, Project Officer for Reef Catchments, a not for profit Natural Resource organisation, assisted us with our coral identification. He said that the opportunity to involve tourism operators as citizen scientists to actively contribute to reef management is a ‘refreshing and an exciting opportunity’.

‘Tourists will love it. Tourists want more than to sit on a beach and drink Pina Coladas these days. They want to be engaged and they want to feel that they are part of the reef and especially if they can contribute to the health and success of the reef.  They want to see what’s going on and be involved in the monitoring of these changes.’

Providence V’s opportunity to undertake the Eye On The Reef, Tourism Weekly Training was supported by the Queensland Government’s Reef Assist Program and delivered by The Great Barrier Reef Marine Park Authority.